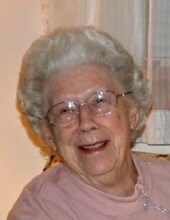 Aubra " Louise" Anderson Berger ascended into glory to be with the Lord on Sunday, December 3, 2017. Louise was born at home on June 20, 1923 to her beloved parents, Lessie Robertson Martin and Clyde C. Anderson, Sr. Louise was an eighth generation Virginian, descended from early settling families of Chesterfield County, such as the Robertson, Walthall, Wooldridge,Trabue, Robiou, Baskerville, Cox, Archer, Traylor and Markham families. She was descended from Vikings by way of her Scandinavian and Celtic heritage; and she descended from French Huguenots who settled in Manakintowne, in Powhatan in 1700. Louise lived 91 of her 94 years in Chesterfield County. Her most recent years were at A Loving Heart , Powhatan, Va., in the excellent care of Donna and Jiggs Gordon and their devoted staff. Despite her declining health, they went out of their way to make her final years comfortable and even cheerful. She was a life time member of Providence United Methodist Church, where her father's family was among its founders. On October 19, 1944 Louise began her life as the bride of Carter L. Berger of Cumberland, Va. They were married 49 years, having two children, Susan Gail Berger Martin (Dale), and Brian C. Berger. Lou was preceded in death by her loving husband, her parents, her dear Grandmother, Clara Cox Martin, three siblings; Mildred Crostic, Benjamin and Clyde Anderson, Jr., and her daughter-in-law, Debra Scott Berger. Cherishing her memory, she leaves her daughter and son-in-law, son, beloved grandchildren to whom she was the "Very Best Grandma in the Whole Wide World," Wendy McClellan, Justin Martin (Amber), Jonathan Berger, Nathan Berger (Julia), Kaitlyn Hodges (Eric), and Kylene Berger. Precious great grandchildren, Layne Puryear, Rachel McClellan, Emily Ruckart, Ava Martin, Cameron,
Nathan Jr. and Lillian Berger, Aubrey and Dylan Hodges. Lou was a generous, gracious, humble and loving mother, wife, grandmother, daughter, sister, aunt, and friend, always placing others ahead of herself. She especially enjoyed old family stories and pictures, antiques, the activities of her children and grandchildren, and family visits. While the world will certainly be a duller, less colorful place, her darling spirit and sense of humor will make us smile for years to come. She is loved always, and in all ways. God speed, Lou. Visitation will be Wednesday, December 6, from 3 to 7 pm in the Bennett & Barden Funeral Home, 3215 Anderson Hwy. (Rt. 60) Powhatan. Funeral services will be Thursday, December 7, 2017, 1 pm, at Bethel Baptist Church,1100 Huguenot Springs Rd., Midlothian. Interment to follow in Grove Cemetery, Sunnyside, Cumberland. In lieu of flowers, the family requests charitable donations may be made in Lou' s name to The Shriners Hospital for Children, ACCA Shrine Center, 1712 Bellevue Avenue, Richmond, Virginia 23227. Online condolences may be made at bennettbardenfh.com.
To order memorial trees or send flowers to the family in memory of Aubra "Louise" Berger, please visit our flower store.