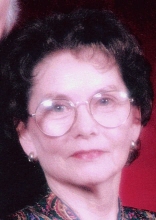 Audrey Mae Caldwell Jones of Brandon, FL, age 82, previously of Powhatan, VA and Columbia, MD died March 18, 2013 at her home after a long battle with cancer. She is survived by three children, a son, David Jones of Springfield, VA, daughter, Patricia Todd & son-in-law, Glenn Todd of Brandon, FL, and son, Calvin Jones (Buddy) of Brandon, FL. She is also survived by one grandson, Ian Arthur Jones, of Springfield, VA, granddaughter Laura Audrey (Freund) Roetter and her husband Adam Roetter, of Orlando, FL, and granddaughter Carly May Jones, of Pensacola, FL. Audrey was born and raised near Blacksburg, VA. She is survived by three sisters, Joyce Kitson and her husband Malcom of Chatham, NJ, Joann Miller and her husband Ralph of Blacksburg, VA and Juanita Rickmon and her husband James of Pensacola, FL. She is predeceased by four brothers, Clarence, John, Ralph and Harlan Caldwell and two sisters Hilda Brennalt and Marie Jennelle. She is also survived by many treasured nieces and nephews. She graduated from Blacksburg High School and attended Virginia Tech for several years before her marriage to Calvin Cecil Jones (deceased) of Powhatan, VA on November 3, 1951. Audrey and Calvin lived in Jessup, MD and later Columbia, MD until 1987 when they retired and moved to Powhatan, VA. They lived in Powhatan for 18 years and moved to Brandon, FL in 2004. After making sure her family and home were cared for to the highest standard, Audrey pursued a variety of interests. In Columbia, she was a charter member of the Columbia Baptist Fellowship Church where she became a deaconess, librarian, chaplain associate, flower arranger and friend to all. She was also a member of the Woman's Club of Catonsville, MD. In Powhatan, she was a devoted member and served as an Area President for the organization Family and Community Educators (Extension Homemakers). In Brandon, she volunteered at the gift shop at Center Place and was a member of Bell Shoals Baptist Church. She loved gardening, quilting and oil painting. The family will receive friends Saturday, June 15, 2013 from 1pm to 2pm in the Bennett & Barden Funeral Home, 3215 Anderson Hwy.(Rt.60), Powhatan followed with a funeral service at 2pm. Interment Powhatan Community Cemetery.

To order memorial trees or send flowers to the family in memory of Audrey Mae Caldwell Jones, please visit our flower store.