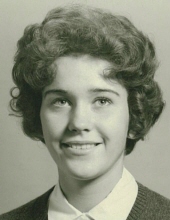 Charlotte M. Johnson, 70, of King William, passed away September 30, 2016. She is survived by her husband of 52 years, Kenneth W. Johnson; daughter, Paula Lowe of Varina; her mother, Edith Branum of Richmond; sisters, Carolyn Gale (Mike) of Smithfield, Fran Brown (Buzz) of Richmond; ten grandchildren and fifteen great grandchildren. She was preceded in death by two daughters, Lori and Lisa Johnson. The family will receive friends Monday from 6 to 8pm in the Bennett & Barden Funeral Home, 3215 Anderson Hwy.(Rt.60), Powhatan and where services will be held Tuesday at 2pm. Interment Powhatan Community Cemetery. Online condolences may be made at bennettbardenfh.com
To order memorial trees or send flowers to the family in memory of Charlotte M. Johnson, please visit our flower store.