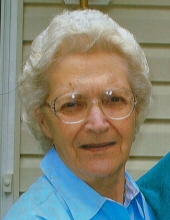 Connie M. Stroud, 88, of Powhatan, widow of Howard B. Stroud, passed away April 20, 2019. She is survived by three sons, Ronnie L. Stroud (Shelia), Thomas R. Stroud both of Powhatan, Howard E. Stroud (Brenda) of Tennessee; one sister, Jane Yancey of Mechanicsville; ten grandchildren, thirty-two great grandchildren and one great-great grandchild. She was preceded in death by one son, Dennis Wayne Stroud. The family will receive friends Tuesday from 6 to 8 p.m. in the Bennett & Barden Funeral Home, 3215 Anderson Hwy.(Rt.60), Powhatan. A graveside service will be held Wednesday at 11:00 a.m. in the The Bridge Church Cemetery, Powhatan. Online condolences may be made at bennettbardenfh.com
To order memorial trees or send flowers to the family in memory of Connie Marie Stroud, please visit our flower store.