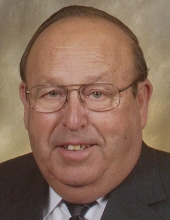 Ellis M. Palmore, 80, of Powhatan, son the late George and Emma Palmore, went to be with the Lord April 24, 2016. He is survived by his wife of 62 years, Colleen D. Palmore; five children, Robert M. Palmore (Patsy), Linda Cheatham, Janet Trivett (John), David E. Palmore (Jill), Tracey Smith (Rick) all of Powhatan; one sister, Mildred Webb (H.H.) of Midlothian; twelve grandchildren and nineteen great grandchildren. He was preceded in death by four siblings, Edgar Hobson, George M. Palmore, Jr., Robert A. Palmore, Ruth H. DeNoon and son in law Michael Cheatham. Mr. Palmore was the owner of Ellis Palmore Lumber Co. for 52 years, a lifelong member of Hobson's Chapel United Methodist Church were he served as Sunday School Superintendent for over 50 years, charter member of Macon District Fire Dept. He was Instrumental in the starting of Huguenot Academy and served on the Board of Directors for over 20 years, served on the Powhatan Electoral Board, he loved square dancing and watching his children, grandchildren and great grandchildren play sports. Ellis lived his life unselfishly giving his life work for the happiness of his wife, children, grandchildren, great grandchildren and his community. The family will receive friends Wednesday from 2 to 4pm and 6 to 8pm in the Bennett & Barden Funeral Home, 3215 Anderson Hwy.(Rt.60), Powhatan. Funeral services will be held Thursday at 11am in the Hobson's Chapel United Methodist Church, Powhatan. Interment church cemetery. In lieu of flowers contributions may be made to Powhatan Relay for Life or Hobson's Chapel United Methodist Church. Online condolences may be made at bennettbardenfh.com
To order memorial trees or send flowers to the family in memory of Ellis M. Palmore, please visit our flower store.