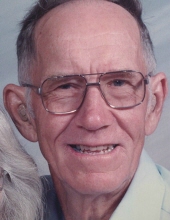 Ellsworth B. "Brud" West, 91, of Moseley, died peacefully in his home on January 12, 2016. He is survived by his loving wife of 60 years, Lois A. West; two daughters, Anne Johnson (Donald) and Faye Decker (Gene); four grandchildren, Morgan Decker, Quinton Johnson (Bridgette), Rachel Decker and Wyatt Johnson (Brittany); three brothers, W.L. West of Chesterfield, Norman M. West and Selden R. West, both of Powhatan; one sister, Dorothy W. Reese of Bracie. He was preceded in death by his parents, Willie and Ella; five sisters, Bernice W. Mitchell, Evelyn W. Stopf, Laura W. Poindexter, Elsie Joyce West Hill Overby and Lois West Zahn; one brother, Mayo D. West. He served in the United States Navy and was veteran of World War II. He was employed at Reynolds Metal Company for 32 years before retiring in 1985. He was a devoted member who faithfully attended Skinquarter Baptist Church and loved the Lord. He was a loving husband, father, grandfather and friend. The family will receive friends at Skinquarter Baptist Church from 10 AM to 11 AM on Thursday, January 14, 2016, followed by a service at 11 AM. Interment church cemetery. He will be greatly missed by his friends and neightbors in the community. Online condolences may be made at bennettbardenfh.com

Skinquarter Baptist Church
To order memorial trees or send flowers to the family in memory of Ellsworth B. "Brud" West, please visit our flower store.