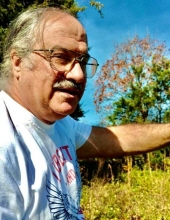 Harry Lee Upson II of Farmville, Virginia, died peacefully at age 64 on December 29, 2020. He is survived by his wife, Vanessa Upson, his mother, Betty Sauer, his sister, Debbie Thompson (Larry), his children, Coleman (Misty) Upson and Rebecca Upson (Robert Thompson), his grandchildren, Nathaniel, Alexander, and Christian Upson, his niece and nephew, Matthew (Ria) Thompson and Whitney (Robert) Lipscomb, and many beloved aunts, an uncle, and cousins. Harry graduated Powhatan High School in 1975 and was very successful in many occupations, including a hardware store owner, a rural mail carrier, a carpenter, and a foreman at Richmond Engineering Company. He was hard working man and didn’t know a stranger. He was a man of the church and a loving husband, father, brother and uncle. A public viewing will be held on Monday, January 4, from 1-6 PM and visitation with family from 6-8 PM at Bennett & Barden Funeral Home, 3215 Anderson Hwy, Powhatan, VA 23139. A public graveside service will be held on Tuesday, January 5, at 3 PM in Trinity Memorial Gardens, 22482 Prince Edward Hwy, Rice, VA 23966. In lieu of flowers, contributions may be made to Crusillo, Cowboys for Christ, or an organization of your choice.
To order memorial trees or send flowers to the family in memory of Harry Lee Upson, please visit our flower store.