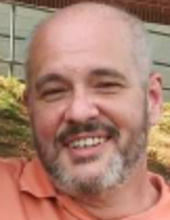 Jason Thomas Williams, 49, of Powhatan, VA gained his heavenly wings Sunday, Sept. 12, 2021. He was preceded in death by his father, Jerry Thomas Williams. He is survived by his wife, Meredith Brooks Williams, son Jacob Thomas, daughter Abigail Elizabeth, and his mother, Joan E. Williams, as well as his maternal grandmother, Curlee Tyndall of Greenville, North Carolina. Jason was a friend to all who knew him, and also leaves behind a host of friends and family members. He graduated as the salutation from Richmond Christian School, and suma cum laude from VCU in accounting. He was currently employed by Capital One Westcreek. Jason was an avid guitar player, lover of the outdoors, boating and martial arts. He held a black belt in Tae KwonDo. Family will receive friends at Bennett and Barden Funeral Home Thursday, Sept. 16th from 6 to 8 p.m. 3215 Anderson Hwy. Funeral services will be held at Red Lane Baptist Church Friday, Sept. 17th at 11 a.m. in Powhatan, VA. Internment to follow the service at Powhatan Community Cemetery in Powhatan, Va.
To order memorial trees or send flowers to the family in memory of Jason Thomas Williams, please visit our flower store.