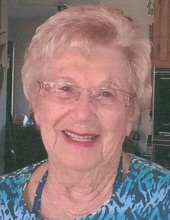 Jean Condrey "Mama Jean" Blount, 87, of Powhatan, formerly of Deltaville, widow of Eddie Blount, went to the loving arms of her heavenly Father November 14, 2016, surrounded by her loving family. She is survived by her daughters and their husbands; Brenda and Larry Proffitt of Powhatan, and Linda and Jerry Jennings of Chester; brother Bill Condrey (Edie) of Chesterfield; five grandchildren, Bruce Blount, Aymi Justice (Shawn), Jay Jennings (Liz), Matthew Jennings (Holly), Samantha Proffitt; twelve great grandchildren, Christian, Madison, Jessie and Lyric, Logan, Lindsey, Jacob and Haley, Jacob Lee, Briana, Charlie and Brycen Edgar. She was preceded in death by her son, David Condrey Blount. Mrs. Blount was a retired police officer of 30 years with the City of Richmond. A memorial service will be held Saturday, November 19 at 2pm in Mount Moriah Baptist Church, Powhatan. In lieu of flowers, donations may be made to the woundedwarriorproject.org. Online condolences can be made at bennettbardenfh.com
To order memorial trees or send flowers to the family in memory of Jean Condrey "Mama Jean Blount, please visit our flower store.