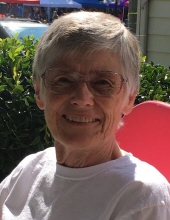 Jeanie Leigh Arehart Renger, 77, of Powhatan, Virginia, passed away August 26, 2018. She was born on April 27, 1941 to Lewis & Pauline Arehart. Jeanie met and married her handsome Army Lt., Gary Renger, in 1963 and they held hands through 55 years of marriage and raised their two daughters in San Diego, CA and Powhatan, VA. She is predeceased by her parents; granddaughter, Jamie Donohoe; brothers, Jack Arehart & Antony Arehart. She is survived by her husband, Gary Renger; daughters, Dixie Renger (Ken Tilghman) and Jane Renger (Sid Strawderman); grandchildren, Katelyn Donohoe (Luke Haas) and Bryan Donohoe (Mollie Schmitt); brother, Gary Arehart (Jean) and her nieces and nephews, Eric, Allan, and Erin Renger; and Kenneth, Stacey and Tony Arehart as well as several great nieces & nephews. She was excited about her first great-grandchild expected to arrive this December. She was devoted to her family and always took the best care of us – even while we were trying to take care of her. She loved the beach and spent many happy times on family vacations to Nags Head where wonderful memories were made. She was a strong lady, surviving breast cancer two times. Jeanie was a student of history and a life-long avid reader which led her to a 20-year career as a bookseller for Barnes & Noble. She likely read every historical biography that was ever fit to read. She loved her Ladies of the Lake book club. She was a strong advocate for the Equal Rights Amendment and public education. In the 1970’s she volunteered as a tutor at the Bay Park elementary reading lab in San Diego to help students with difficulties reading. She gave greatly to the community by serving on the Powhatan County School Board (1986-1993); serving as Vice Chair 1988-1992 & Chairman 1992-1993. Following her tenure on the school board, she was appointed to the Powhatan County Electoral Board in 1998 where she served as Chairman of the board for 12 consecutive years. She was reappointed to the Powhatan County Electoral Board in 2012 where she served as Chairman for two more years. Following reappointment in 2014, she then assumed the duties of Electoral Board Secretary until her resignation for health reasons in 2018. All combined, her service on the Powhatan Electoral Board totaled over 18 years - tirelessly striving to ensure fair and accurate elections in Powhatan County. She was a proud member of the Powhatan County Democratic Committee working to expand its membership and spearheading the fundraising and presentation of the Margaret F. Ball Scholarship to honor her friend and provide assistance to a Powhatan High School senior planning to study political science or history and awarded regardless of their political affiliation. The family wishes to thank the entire staff of Hospice of Virginia for their care and compassion and especially, Debbie, Jenn, Juanita, Lori, Torri and Megan who provided invaluable assistance and hand-holding. The family will receive friends Thursday from 6 to 8 p.m. in the Bennett & Barden Funeral Home, 3215 Anderson Hwy.(Rt.60), Powhatan. Services private. In lieu of flowers, donations in her honor may be made to the Margaret F. Ball Scholarship Fund, PO Box 982, Powhatan, VA 23139. Online condolences may be made at bennettbardenfh.com
To order memorial trees or send flowers to the family in memory of Jeanie Leigh Arehart Renger, please visit our flower store.