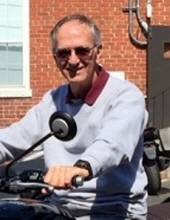 Larre Phillip Butterfield, 63, of Powhatan Virginia, passed away on Tuesday, March 20, 2018 of pancreatic cancer. He is survived by his wife Brenda, son Eric (Karen) Butterfield, daughter Cristina (Robert Weller) Butterfield, stepson Matthew Riffell, stepdaughter Kristen (LeAndre) Bean, and six grandsons Phillip, Peter, James, Liam, Conner, and Charlie. He is preceded in death by his parents Shirley Butterfield and L. Phillip Fernandez. Larre and Brenda married on August 01, 1998. They were married just shy of 20 years. Larre was the “gold standard” of husbands - a true classy, southern gentleman that was courageous, inspiring, entertaining, encouraging, and loving. Larre worked in Finance for Northrop Grumman for 35 years, retiring in 2011. He was an avid motorcycle rider and loved all motor sports. In retirement, he crossed a major item off his bucket list by riding his Triumph motorcycle across country, earning himself an Iron Butt achievement award. Larre was also active in volunteer work with the Powhatan Food Pantry.
Larre was a goofy, loving father and grandfather. He will be remembered for his silly faces, easy smile, and genuine kindness. He valued family, learning, tolerance, and equality. A Celebration of Larre's life will be held on Sunday, April 15, 2018, 2 p.m. at the Powhatan United Methodist Church, 2253 Rosson Road, Powhatan, Virginia 23139. Pastor John Hemming will be officiating. In lieu of flowers, memorial, donations may be given to the Pancreatic Cancer Action Network (Pancan.org) or to the Powhatan Food Pantry, 3620 Goodwyn Road, Powhatan, VA 23139.
To order memorial trees or send flowers to the family in memory of Larre Phillip Butterfield, please visit our flower store.