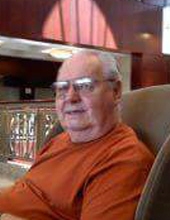 Challenor
Linwood Hugh, Sr.81, of Powhatan, passed away on March 18, 2016. He is preceded in death by his parents Raymond and Alva Challenor; brother, Raymond Challenor; sister, Alva Prince. He is survived by his loving wife of 60 years, Barbara Bickley Challenor; two sons, Lin Jr. (B.J.) and Paul (Cheryl); two grandchildren, Ashby (Jennie) Jefferson and Megan Challenor; five great-grandchildren, Brent, Gabrielle, Zoey Jefferson, Layla and Jordyn Challenor; two sisters, Francis Butler and Catherine Glass. Numerous nieces and nephews.
Born and raised in Richmond on Oregon Hill provided much excitement growing up. The city of Richmond was vibrant and growing. The perfect place for a young man to grow up. After meeting and dating his sweetheart Barbara he decided he wanted her forever in his life. Marriage was next then the birth of their first son five years later. Wanting to raise his family in a rural area, he talked his father into selling the house his parents moved into when they moved from Oregon Hill since all the children had "flew the nest". Bon Air in Chesterfield County proved to be a great place to raise a family. Five years later their second son was born. For twenty years Bon Air was home. With Chesterfield County growing leaps and bounds, it was time to find a new rural area to move to. Powhatan County provided what he wanted in a new place to live. For thirty years Linwood and Barbara lived there, this was home, the way Bon Air used to be. It provided everything they wanted in a community and more.
Retiring in 1997 after working in Accounting and Bookkeeping he was able to spend all his time with his beautiful wife Barbara. Declining in health he was placed into hospice for the last seven months of his life. God gently took him home. The family will receive friends Tuesday 2 to 4 pm and 6 to 8 pm in the Bennett & Barden Funeral Home 3215 Anderson Hwy.(Rt.60) Powhatan and where services will be held Wednesday 2 pm. Interment Powhatan Community Cemetery.
To order memorial trees or send flowers to the family in memory of Linwood H Challenor Sr., please visit our flower store.