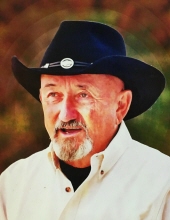 Melvin Clinton Arrington "Clint" 68, of Powhatan, passed away on Sunday April 23, 2017. He is survived by his life partner, Sherry Newark; son William Arrington; grandson William Hunter Arrington; sister Audrey Andrews (David); brother Linwood Arrington (Annette); numerous aunts, uncles, cousins, nieces and nephews. He is preceded in death by his mother Zadie Arrington and his father Trooper Melvin Arrington. Clint was the founder of Lonesome Dove Equestrian Center, a non-profit organization which provides therapeutic riding to Veterans with disabilities. His dedication and passion for providing support to Veterans has been admired by many. He received various awards and commendations both from his community and State level for his work with Lonesome Dove. In addition, he was a retired brick and stonemason whose work remains a monument to his creativity and skill. A Celebration of Clint's life will be held at Lonesome Dove on Saturday, April 29, 2017 at 1:00p.m. Please bring a fond memory to share with everyone. In lieu of flowers, contributions may be made to Lonesome Dove Equestrian Center.
To order memorial trees or send flowers to the family in memory of Melvin Clinton Arrington, please visit our flower store.