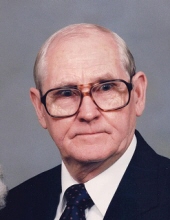 Ollie L. Profitt, 87, of Richmond, went home to Jesus November 11, 2017. He was preceded in death by his parents, Edward and Laura Proffitt, seven sisters and ten brothers. He is survived by his wife of 66 years, Catherine Frayser Proffitt; four children, Linda Mason (Phillip), Ronald Proffitt (Donna), Susan Liptak (Terry), Robin Sadak (Dean); nine grandchildren and three great grandchildren. His twin brother died the day of their birth and was the first loss of his siblings with Ollie being the last to join his family in a heavenly reunion. Ollie worked for Colonial Stores, Big Star Foods and Three Chopt Market as a Produce Manager. He served in the U.S. Army during the Korean War. He was a member of Skipwith United Methodist Church since 1961. He loved his Lord Jesus, family and friends. Ollie enjoyed life, building a cabin in Cumberland for hunting, fishing and bird watching in his later years. Diagnosed with Alzheimer's in 2015 he kept his optimistic personality and sense of humor. The family will receive friends Wednesday from 6 to 8 p.m. in the Bennett & Barden Funeral Home, 3215 Anderson Hwy.(Rt.60), Powhatan. A memorial service will be held Thursday at 3 p.m. with a brief visitation from 2 to 3 p.m. in the Skipwith United Methodist Church, 2211 Skipwith Rd., Richmond. Interment private. Memorial donations may be made to Skipwith United Methodist Church.
To order memorial trees or send flowers to the family in memory of Ollie Lee Proffitt, please visit our flower store.