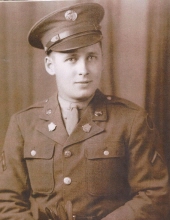 Otis L. Duke, 95, of Powhatan, formerly of Henrico, widower of Virginia C. Duke, went to his heavenly home January 16, 2019. He is survived by two daughters, Carolyn Wright (Wayne) of Powhatan, Diane Billings (Peter) of Wake Forest N.C.; three grandchildren, Nathan, Laura, David; two great grandchildren, Abby, Sean; two devoted caregivers Ernestine and Page. Mr. Duke was a World War II veteran who was part of the Anzio Beachead Invasion and the Campaign in Italy. The family would like to thank Westport Rehabilitation and Nursing Center for their loving care. A memorial service will be held at Muddy Creek Baptist Church in Powhatan, Saturday January 26, 2019 at 11 a.m., burial will follow in the church cemetery. In lieu of flowers contributions may be made to Muddy Creek Baptist Church, 3470 Trenholm Rd. Powhatan, Va. 23139.
To order memorial trees or send flowers to the family in memory of Otis L. Duke, please visit our flower store.