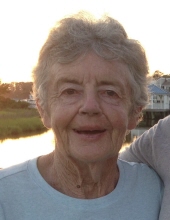 Pat was born in Oxford, England on June 24, 1942, one of three daughters of Edward and Rosamond Bowen. She attended boarding school and began riding with a local pony club on school holidays. In 1968, she met Jon Heath Betts of Richmond, Virginia while they both were abroad in Dhaka, Bangladesh. They were married in Richmond in August 1970. Pat and Jon purchased property known as Level Green in Powhatan, VA in 1971. They had three daughters, and Pat started teaching riding lessons to her girls and neighboring children. Level Green Riding School was incorporated in 1981 and grew in size and students under her tutelage for thirty years. Pat lived her final years with Jon in the care of her daughters at home.

Pat is survived by her husband, Jon, daughters Yvonne Holliday (Daniel, Alex, Zoe, Thomas), Fiona Turner (Jay, Hugh, Helen, Bowen), Emily Betts (Asheley Tuck, James), sisters Diana Tamkin and Gillian Frasier. Pat is preceded in death by her parents and Heath Christopher Turner. In lieu of flowers, donations may be made to Habitat for Humanity in Powhatan or Meals on Wheels (FeedMore). A private service will be held for the family and a memorial service for all her friends will be held at Level Green in the spring.
To order memorial trees or send flowers to the family in memory of Patricia Ann Betts, please visit our flower store.