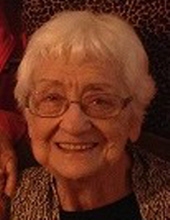 Patricia Ann Okoniewski, 85 of Powhatan, formerly of Oswego N.Y., widow of Joseph S. Okoniewski, passed away December 14, 2017. She is survived by her daughter, Donna O. White (Paul) of Powhatan; brother, John C. Henderson of Oswego, NY.; many nieces and nephews. She was preceded in death by her brothers, David, Fred, Samuel Henderson; sisters, Mary Hall and Dorothy Gorman. A Christian Wake will be held Sunday at 2 p.m. in the Bennett & Barden Funeral Home, 3215 Anderson Hwy.(Rt. 60), Powhatan. Services with burial will be held in Oswego, NY. In lieu of flowers contributions may be made to smiletrain.org or the charity of choice. Online condolences may be made at bennettbardenfh.com
To order memorial trees or send flowers to the family in memory of Patricia Ann Okoniewski, please visit our flower store.