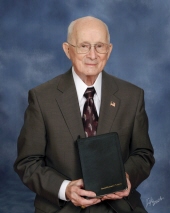 Reverend Leonard Charles Vimpeny, age 87, of Powhatan, Virginia, passed away Saturday, May 31, 2014, at his home. He is survived by his beloved wife of 68 years, Edna Marie Huband Vimpeny: four daughters and sons-in-law; Rebecca and Kenneth Hatcher of Powhatan, Ann and Gene Hatcher of Powhatan, Lynn and Frank Higgs of Fredericksburg, and Dr. Virginia and Brian Lewis of Powhatan; 9 grandchildren; 18 great grandchildren; a sister, Betty King of Texas. Leonard (Bud) was born in Lakewood, Ohio on July 27, 1926. In 1943, at 17, he enlisted in the Navy, where he served in the Asiatic Pacific during WWII. He was honorably discharged in 1946. He worked at his dad's Ohio auto body shop before moving to Virginia and being employed at DuPont-Spruance. While living in Chesterfield he served as 2nd Lieutenant in the Bensley Volunteer Fire Department. In 1951 he transferred to the DuPont Atomic Energy Plant on the Savannah River and relocated the family to Aiken, South Carolina. During this Cold War Era, Leonard served as Director of Civil Defense for Aiken County, and Director for South Carolina Civil Defense Director's Association. In this position he attended the testing of two atomic detonations in Nevada. He also built a model a model underground bomb shelter for the City of Aiken. In 1961 Leonard was licensed to preach by Millbrook Baptist Church. In 1963 he became an ordained minister, pastored Tabernacle Baptist Church, and graduated from North Greenville College in South Carolina. In 1965, Leonard became the first full-time pastor of Muddy Creek Baptist Church, while also pastoring Mt. Moriah Baptist Church, both in Powhatan County. Before retiring from the ministry he pastored four additional churches in West Virginia and Virginia. After retiring he served as Director of Missions for the Staunton River Baptist Association, as well as serving three additional churches on an interim basis. During his fulltime ministry he founded and served as director of SERVE (a FEMA program thrift store), DAWN (a food supply thrift store), and God's Storehouse in Danville, and was on the Board of Directors for Alta Vista's Faith Christian Academy. He also created, and administered, The Scottie Young Medical Fund. He was a member of the VFW and American Legion Post #201 in Powhatan County and a past member of the Lynch Station Ruritan Club. Leonard was a proud WWII Veteran. Leonard was predeceased by his parents Alvin and Mildred Vimpeny; sisters, Janet Tite; Millie Trupo; half-sister, Corky Skidmore; and a brother Allen Vimpeny. The family will receive friends Monday (tonight) from 6 to 8pm in the Bennett & Barden Funeral Home, 3215 Anderson Hwy.(Rt.60), Powhatan. Funeral services will be held Tuesday 11am in the Muddy Creek Baptist Church, Powhatan. Interment church cemetery. Memorial contributions may be made to Muddy Creek Baptist Church Youth Fund, 3470 Trenholm Rd. Powhatan, Va. 23139 or the charity of your choice.

To order memorial trees or send flowers to the family in memory of Reverend Leonard Charles Vimpeny, please visit our flower store.