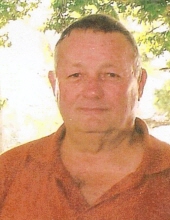 Robert Watkins Allen "Bobby", 78, of Powhatan, formerly of Charlotte Courthouse, went peacefully to be with the Lord early Thursday December 28th 2017. He was preceded in death by his parents Watkins and Vergie Allen; brother, Jimmy Allen. He is survived by his wife of 58 years Bonnie Toombs Allen; son, Timmy Allen; daughters, Dana Allen, April Allen Hottinger (Leroy); grandchildren, Wayne Allen, Luke, Walker and Steele Hottinger. He loved driving a truck for almost 40 years, many of those with Don's Trucking. Then he retired from Powhatan County where he worked part time at the transfer station and enjoyed talking to everyone who came in. He also loved watching NASCAR racing and baseball. In Lieu of flowers donations can be made in his memory to the Bon Secours Community Hospice House. The family will receive friends Saturday, January 20th from 1 to 3 p.m. in the Bennett & Barden Funeral Home, 3215 Anderson Hwy.(Rt.60), Powhatan.
To order memorial trees or send flowers to the family in memory of Robert (Bobby) Watkins Allen, please visit our flower store.