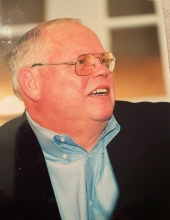 Roy J. Harrison, age 75, of Powhatan, passed into his eternal rest on September 29, 2021, following an unexpected illness. Roy was born in Hickory, Va. to Roy J. Harrison, Sr. and Miriam Williams Harrison. He entered the world prematurely and he exited the same way. His youth was spent hunting, fishing, playing ball, and pirating along the shores of Kitty Hawk, NC at SeaSwept, the cottage he helped his father rebuild after the Ash Wednesday Storm. Roy, a quiet advanced math student and football player (Great Bridge High School, Class of 1963), asked his friend, Mary, to Homecoming and then Prom. They have been partners ever since. Roy attended VPI (Civil Engineering) and graduated from Union College, Kentucky (B.A., Mathematics). His time in Appalachia impressed Roy with the need for good works and service to others. Roy’s career included highway and bridge construction as well as engineering and construction cost estimating with HNTB, Dominion Power, and Evantage. The Powhite Parkway Bridge was Roy’s first inspected bridge. He was the co-founder of
Premier Project Management Group, LLC. Roy’s greatest moments outside of family were found in community service. He was a member of St. John Neumann Catholic Church, former Supervisor of the Powhatan County Board of Supervisors (1993-2004), member and former president of Powhatan Lions Club, member and former president of Powhatan Jaycees,
member of the Powhatan Ruritan Club, the local Republican Committee, past Chairman of Habitat for Humanity and volunteered with the Powhatan Christmas Mother. Roy was most proud of his work to help bring about the renovation of The Village Building, the new Powhatan High School, and Fighting Creek Park. When Covid struck and boredom threatened, he
decided to get the septic tank pumped and joined Facebook. Friends looked for posts that brought groans, giggles and belly laughs. Roy’s passions included family, faith, Powhatan County, Hokie football, history, Smith Mountain Lake and enjoying a good joke. Roy is survived by his wife, Mary Midgett Harrison; his daughters Kathryn Dickerson (Richard), Christine Hederick (Josh) and Karen Heinike (Martin) and seven grandchildren: Zachary Dickerson, Reilly Dickerson, Mary Kathryn Hederick, Paige Hederick, Charlotte Hederick, Chaytor Green, and Russell Heinike whom he considered to be his true treasures. The family will receive friends from 6:00 - 7:00 pm followed by a Wake until 8:00 pm on Sunday, October 10, 2021 at St. John Neumann Catholic Church, 2480 Batterson Road, Powhatan, Va. 23139. A Mass of Christian Burial will be held on Monday, October 11, 2021 at 10:30 am at the same location. In lieu of flowers the family has requested that donations be made to
the Human Concerns fund, at St. John Neumans Catholic church. In lieu of food, donations may be made to Feeding Powhatan. To honor Roy, the family encourages you to tell a joke and make someone smile.
To order memorial trees or send flowers to the family in memory of Roy Judson Harrison, Jr, please visit our flower store.