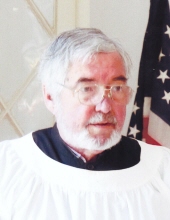 “Wayne Elwood Whitley of Cartersville, Virginia, 70, went to be with the lord on January 20, 2018 at University of Virginia Hospital in Charlottesville, Virginia. He was a member of St. James Episcopal Church of Cartersville, Virginia and formerly served as a lay reader. He was preceded in death by his Parents, Elwood and Dorothy Whitley. He is survived by his loving wife, Elaine J. Whitley, His sister and brother in law, Dawn and Chuck Hoffman, His sister in law and husbands; Mr and Mrs. Michael Dodson and Mr. and Mrs. Douglas Mooney, his In Laws, Mr and Mrs. F. Leon Jessup, his four children and wives; Jessica Dowdy-Haas, Andrew & Alicia Haas, Luke Haas (& Katie) and John Haas, his four nephews; Adam Hoffman, Seth Hoffman, Jacob Hoffman and Luke Hoffman, five grandchildren; Memphis, Ashlyn, Blakley, Layne and Baylee, as well as his uncle Reese Whitley and many unnamed family and friends. He graduated from the University of Virginia in 1970 with a B.A. in English and Masters in Latin. He was a brother in the fraternity of Delta Sigma Phi at the University of Virginia, where he became life long best friends with William H Towles. He was a teacher for over 40 years at Trinity Episcopal School of Richmond, VA, Blessed Sacrament at Belmead as well as Blessed Sacrament-Huguenot of Powhatan, VA. For the last 10 years he worked for the United States post office as an assistant post master. His biggest adventure was the Hamilton School house. He put lots of time and effort into restoring this historic landmark.

He will be greatly missed and the family would appreciate you joining us in celebrating his life and legacy. His funeral service will be on Wednesday, January 24, 2018 @ 11A.M. at St. James Episcopal Church, 2287 Cartersville Rd, Cartersville, VA 23027. The family will be receiving guests at St. James Episcopal Church after the funeral service. The graveside service will be held at Emmanuel Church, 2390 Emmanuel Church Road, Powhatan, VA 23139 @ 2P.M. In lieu of flowers, please donate to the "Hamilton High School foundation”. An account has been set up at Wells Fargo, 3901 Old Buckingham Rd, Powhatan, VA, 23139.
To order memorial trees or send flowers to the family in memory of Wayne Elwood Whitley, please visit our flower store.