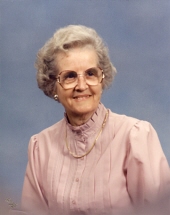 Ann Crump Sloan, 93, of Powhatan, formerly of Anniston Alabama, widow of Fred F. Sloan, died March 17, 2015. She is survived by her sons, Bobby Sloan of Village of Lakewood, Il.; Freddy Sloan of Powhatan, Va.; two sisters in law, Helen Crump, Lonnie Crump both of Texas; six grandchildren and fifteen great grandchildren. The family will receive friends Thursday, March 26, 2015 in the Johns-Ridout's Mortuary in Birmingham, Alabama from 9:30 to 11:00 am followed by a funeral service at 11:00 am. Interment Elmwood Cemetery, Birmingham.

To order memorial trees or send flowers to the family in memory of Ann Crump Sloan, please visit our flower store.