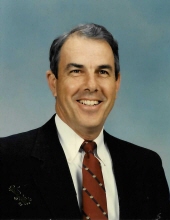 Archie Goodwyn (85) passed away peacefully in his home surrounded by his family on September 14, 2022 He was preceded in death by his parents Richard C. Goodwyn and Mary W. Goodwyn, three brothers "Kaiser" and his wife Jean Worsham, N.B. "Tootie"and his wife Jean Goodwyn, and Royce Goodwyn, brother in law JA Ransone Jr.

He graduated from Powhatan High school in 1957. Always the athlete, he attended University of Richmond where he played baseball and football.

Guided by his strong faith Archie lived his life well; full of joy, kindness and memories to fill several lifetimes. He was respected and admired by many. He enjoyed his time on the golf course, watching the Richmond Spiders basketball and football games, and of course being with his loving family.

Funeral services will be held Monday, September 19th at Red Lane Baptist Church with visitation at 10:00 am and funeral service at 11:00 am Interment will be at the church cemetery.

To order memorial trees or send flowers to the family in memory of Archie Goodwyn, please visit our flower store.