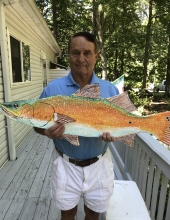 Arthur Wayne Bartlam, age 83, died suddenly on September 30, 2020 at his beloved home on Gwynn’s Island. He was a fisherman tried and true and caught 48 fish on the last day of his life. He was preceded in death by his parents, Arthur and Jeanette Bartlam and his dear son, Mark, with whom he is probably now having a wonderful fishing party with in heaven. Wayne is survived by the catch of his life, his wife, Barbara, of 62 years, his daughter, Cindy Merchant (Mike) of Powhatan, his brother Bruce Bartlam (Pat) of Moseley and his sister Linda Reams (Ken) of Mathews, Virginia. In addition, he is survived by six grandchildren including Elspeth Lambert (Brad), Canaan Merchant (Chelsea), Hannah McClelland (Chris) and Caitlin, Lindsay and Coleman Bartlam and also six great-grandchildren that he adored. He is also survived by his nephews, Chip Reams and Jeff Bartlam and nieces, Mary Lyn Paolella, Leigh Ann Piazza and Christy Carlson. There are also many children, teens and young adults who have happily adopted him as their "Granddaddy". He had a large and loving personality. He never met a stranger and would usually end up inviting them to dinner. Those who knew Wayne best were not immune to his constant jokes and teasing. You can bet that if he didn’t tease you then he probably didn’t like you. In addition to fishing and teasing his friends, Wayne excelled in hunting, crabbing, finding arrowheads, breaking his tractor, flirting with young girls, hoarding junk and going to bed ridiculously early. He also enjoyed history, poetry, satire, opera and reading ALL historical markers on the highways much to the chagrin of his family. Wayne was born in Richmond, Virginia and raised as a boy in Chesterfield County. He attended Richmond Polytechnic Institute and University of Connecticut and was in the Naval Reserves. He moved his family to Powhatan in 1969 to enjoy the rural life. He worked at Richmond Federal Savings and Loan before moving on to the Defense General Supply where he retired. He was a member of Red Lane Baptist Church for 51 years where he served as deacon, youth director and chairman of the building committee. As you celebrate his life please be reminded "that a little bit of Wayne goes a long way". If you desire to carry on his legacy then spend time with a child and teach him or her to fish and don’t " burn daylight". Family will receive friends Sunday, October 4th from 2-4:00 PM. Services will be held at Red Lane Baptist Church on Monday, October 5th at 11:00 AM.
To order memorial trees or send flowers to the family in memory of Arthur Wayne Bartlam, please visit our flower store.