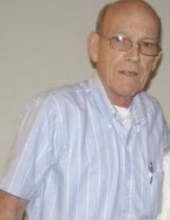 WALTERS, Clarence M. Sr "Papa", 81, of Powhatan, went to his heavenly home on March 24th, 2022. He is survived by his son, Clarence M. Walters, Jr (Sonny); daughter-in-law, Betty Jane; granddaughter, Jessica Walters-Wright (husband Mathew); and great-granddaughter, Sara Beth Naomi Wright. Clarence is also survived by his daughter, Diane Walters; four grandchildren - Tiffany, Tyler, McKenzie and Kanee; and great-granddaughter- Layla. The family would like to extend a special appreciation to John Harris and Danny Davis for their loyalty during his final months. They will receive friends Monday evening from 6 to 8 p.m. and on Tuesday from 10 to 11 a.m. at Full Gospel Church in Powhatan. A service at the same location will be held at 11 a.m. on Tuesday, with interment immediately following.
To order memorial trees or send flowers to the family in memory of Clarence M. (PaPa) Walters, Sr., please visit our flower store.