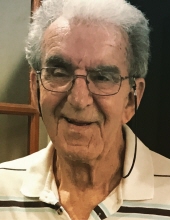 Clyde Ellsworth Case of Powhatan, Virginia, age 82, was born to eternal life in Richmond, Virginia, on October 20, 2021.
Born May 17, 1939, in Franklin, Pennsylvania, to James Franklin and Pauline Delong Case, Clyde graduated high school and joined the United States Marine Corps in 1957. While stationed at N.A.S. Cherry Point, North Carolina, he met Peggy Hearne on a blind date. Although she was initially unimpressed, he persisted; their wedding on November 23, 1961 began a beautiful life together that lasted just one month shy of 60 years.
Clyde's work career included a long-term commitment to Franklin Steel Company. He began in the mill, like his father before him, but quickly moved into the sales department. In 1976 Clyde was tapped to open and manage a regional sales office in Texas, and so he took his family south, settling in Grand Prairie, Texas. Subsequent career moves in the highway sign industry included time with Sargent-Sowell and Ennis Paint Company. Clyde retired from Ennis Paint in 2005.
Clyde's interests were varied and vast, including golf, softball, camping, rebuilding car engines, woodworking, building, music, art, and racing. Virtually anything that caught his interest became a passion; his curiosity led to learning, and his, "Let's figure this out..." attitude led to a rich, full, and exciting life.
An active member of Inglewood Methodist Church in Grand Prairie during his time in Texas, and then Powhatan United Methodist Church in Virginia, Clyde was committed to living out his faith in Christ with intentional acts of service. He did so in various ways; from teaching Sunday School to singing in the church choir, chaperoning youth trips, and participating in Men's Ministry. His community service included partnering with Peggy to drive for Meals on Wheels, and volunteering at the Powhatan Food Pantry and Lonesome Dove Equestrian Center.
Of all the things Clyde passed on to his family-the faith, the curiosity, the passion for sports and music, travel and art-they pale in comparison to his greatest legacy: A family full of love and great affection for one another. Clyde is survived by his wife, Peggy, of Powhatan; a daughter, Beth Stoddard of Powhatan, a son, Eric Case of Chicago, and their spouses, Tony and Shana, who he loved as though they were his own offspring.
His greatest joy was being "Papa Clyde" to his seven grandchildren and great-granddaughter: Sarah Brawley of Richmond; Shannon Brawley Wagner of Kaiserslautern, Germany, and her husband Travis; Sydni Brawley Uher of Encinitas, California, and her husband, Aaron; Daniel Brawley of Medford, Oregon; Emily Case of Madison, Wisconsin; David Brawley of Powhatan; and Levi Case of Columbia, Missouri; and great-granddaughter, Juniper Lee, of Kaiserslautern.
Clyde is also survived by a brother, Jim Case of Franklin, Pennsylvania, five exceptional nephews who share his last name, and many other nieces, nephews, and in-laws he shared with Peggy and her family.
Services for Clyde will be Saturday, October 23, 11AM, at Passion Community Church, 4480 Anderson Highway, Powhatan, Virginia, with lunch and fellowship immediately following.
In lieu of flowers, the family asks that you dial up a Willie Nelson song and sing along - loudly, and preferably in harmony - and then consider a donation to the Powhatan Food Pantry or Powhatan Free Clinic. Clyde's memory will be honored by both.
To order memorial trees or send flowers to the family in memory of Clyde Elsworth Case, please visit our flower store.