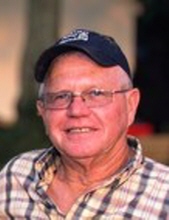 Ray was well known to the community for his generosity but as a man that kept to himself. He was very proud of his accomplishments, of which he built his plumbing company from the ground up and ran for over 30 years. Ray served in the U.S. Army in the Airborne Corp from 1961-1964. Ray adored his grandchildren, his tractor, his home and his dog, lucky.

A visitation will be held, Friday Oct. 7 from 1PM to 2PM at the Bennett & Barden Funeral Home Chapel, 3215 Anderson Hwy, Powhatan VA 23139. With a memorial service to follow at 2PM. Online condolences may be made at Bennettbardenfh.com

To order memorial trees or send flowers to the family in memory of Donald Ray Murphy, please visit our flower store.