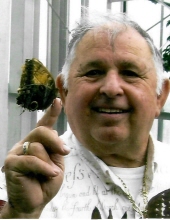 Duncan Buchanan, 84, of Powhatan, went to be with our heavenly Father on Sunday evening, July 18, 2021. Lucie, his wife, was by his bedside when he passed away at their home. He was born May 16, 1937 in New Hanover, North Carolina. He grew up in Portsmouth Virginia and graduated from Cradock High School. He was mostly raised by his loving older sister, Dot, as she also cared for their mother who was quite ill. After high school, he got married and started a family and worked as a foreman at a local factory while attending night school. He soon found a job working as a carpenter for a construction company where he met and became a lifetime friend of Buddy Cline. He moved his family to a farm in Cumberland Virginia in 1970, raising cattle and crops and starting his own business, the Buchanan Construction Company. Later in life, he found a new family to call his own. During that time, he became lovingly known as Mr. Fix-It, the Tomato Man, granddaddy, and of course, Daddy Dunk! He loved to stay busy, go to church each Sunday, sing hymns, go see gospel groups sing, involve himself in community groups (the Jaycees was one), work at landscaping properties and growing his own vegetable garden. He never knew a stranger and loved to talk and teach and enjoyed taking a vacation. He loved his pastor and church family. His patriotism is well known by many with his past fireworks displays and gatherings. He loved flying as many American flags as possible and was often seen wearing patriotic shirts. More than anything, he loved spending time with his family and friends. He loved ALL his grandchildren and great grandchildren. "Step" was not a part of his vocabulary. Duncan is survived by his loving and caring wife of over 23 years, Lucie Smiley Buchanan; son, David Buchanan; daughters, Debbie Braswell (Earl), Donna Buchanan; grandchildren, Lena Chapman (Michael), Nichole Lawrence (Michael); great grandchildren, Kayla, Tori, Cali and Jane; great great grandchild, Briella; step son, William Smiley; son in law, Troy Samuel (widower to Melissa); step grandsons, Jacob, Lucas and Caleb Samuel; step grandchildren, Bentley and Brooklyn; sister in law, Ruby Buchanan (widow to Donald); and many cousins, nieces and nephews. Duncan was preceded in death by his parents, Ned and Evelyn Buchanan; brothers, Welford (Isabel) and Donald Buchanan; sisters, Delores Evelyn Buchanan and Dorothy Kopnisky (Larry); step daughter, Melissa Samuel; nephew, Butch Buchanan. The family will receive friends from 6 to 8 p.m. on Tuesday July 20, 2021 at Bennett & Barden Funeral Home, 3215 Anderson Highway, Powhatan, VA 23139. A Celebration of his Life will be held at 10 a.m. on Wednesday July 21, 2021 at Graceland Baptist Church, 975 Dorset Rd, Powhatan, VA 23139. In lieu of flowers, the family requests that memorial contributions be made to Graceland Baptist Church. Condolences can be made at bennettbardenfh.com.
To order memorial trees or send flowers to the family in memory of Duncan King Buchanan, please visit our flower store.