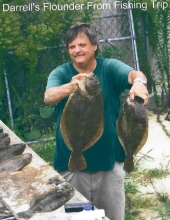 MORGAN, Emmett Darrell, 76, of Powhatan died at home on July 12 following a lengthy
illness. He was born Jan 4, 1945 to Emory and Mabel Louise (Boone) Morgan. He is survived by his wife, Darlene (Rowe) Morgan and 5 children, sons: Christopher Morgan, Jason Morgan (Glennis), Frank Hower, daughters; Sara Morgan, Angie Belkin(Seth). He had 2 grandsons he was especially close to; Cameron Morgan (raised in the home for several yrs) and Jacob Belkin (whose visits he loved). He is also survived by 4 other
grandchldren, and 4 great-grand children. He leaves behind a loving sister; Linda Riddle(James) and a special niece; Detrah Morgan, and 4 other nieces and nephew.
In addition to his parents, he was predeceased by a brother; Calvin, sister; Freda Caul, stepson; Scott Cannady, daugher-in-law; Jennifer Hower. After 28 yrs, he reluctantly retired from Powhatan Correctional Center due to illness. He loved hunting with family and friends and fishing the Chesapeake Bay with Childhood friend, Wilson Cropp. He treasured time he spent with longtime friend, Jimmy Armstrong. He graduated from Rockhill High where he excelled in many sports and held the school record in track that remained until the school closed. Family will receive friends at Bennett and Barden
Funeral Home in Powhatan on July 18th, from 3-5pm. Services will begin at the Funeral Home at 11:00 am on July 19th, 2021. The family would like to extend our sincere gratitude and appreciation to all Bon Secours Hospice Staff for the love and care they gave gave to Darrell and our entire family. Condolences can be made at bennettbardenFH.com.
To order memorial trees or send flowers to the family in memory of Emmett Darrell Morgan, please visit our flower store.