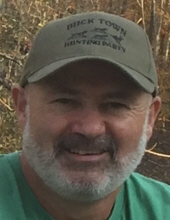 Frederick Douglas Smith, 57 of Powhatan, VA passed away unexpectedly on Thursday, March 3, 2022. He was born in Truro Nova Scotia, Canada. He graduated from Powhatan High School in 1983. Friends would remember him for setting a high school record for throwing the longest touchdown pass. He proudly served in the United States Army from 1983-1987. He continued to show his passion for football by coaching PYAA Tribe Football. He was a senior member of Buck Town Hunting Club. He was best known for his strong work ethic and always there for his family and friends. He owned his own successful business of 34 years, WallCoverings Installed. He enjoyed the outdoors and his love for hunting and socializing with his friends. (And oh, the stories he could tell). He is preceded in death by his mother and father Alice E and Frederick M Smith, his sister Peggy Cacciotti and brother Terry Smith. He leaves behind his wife of 30 years Ann Molinaro Smith (who he referred to as Angel of his life) and two children MacKenzie and Colin a brother Christopher Smith of Bakersfield, California and 3 nieces Madeline and Megan Smith and Emma and her husband Pablo Ramirez and a great nephew and niece. A stepsister Robin Bowser and stepbrother David Light.
Ricky will be forever missed.
Visitation is from 6:00-8:00pm Monday, March 7 at Bennett and Barden Funeral home in Powhatan. Service will be held at 11:00am Tuesday at Passion Community Church.
In lieu of flowers, contributions can be made to Passion Community Church and Buck Town Hunting Club.

To order memorial trees or send flowers to the family in memory of Frederick "Ricky" Douglas Smith, please visit our flower store.