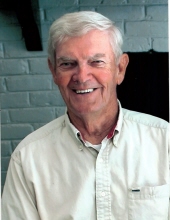 Frederick Warren Boatwright, 85 of Powhatan, Virginia, went to be with the Lord on Sunday, December 27, 2020. He was preceded in death by his parents, James Junious and Minnie Boatwright; his sisters, Virginia Pflueger, Mildred Boatwright, Joyce Johnson, and Shirley Berman, and his brother James Boatwright. He is survived by his wife of 64 years Ruth Boatwright, his children, Leslie Lingenfelser (Buzz) of Blacksburg, Dennis Boatwright (Lori Ann) and Amy Potter (Michael) all of Powhatan; 6 grandchildren, Brandon and Jordan Lingenfelser, Gracie Boatwright, Ladonna Sewell, William and Charlie Potter; 5 great grandchildren, Tyler, Sophia, Callen, Mason and Reed, and many beloved nieces and nephews. Fred was in the electrical and construction business until his retirement. He loved hunting, fishing, cutting hay, and being on his farm. Lovingly referred to as Papa, he always had his grandchildren outside working with him and teaching them the right way to do things. He loved taking his grandchildren to OTJ and his faithful dog, Minnie who was by his side until the end. A Graveside Service will be held Saturday, January 2, 2020 at Muddy Creek Baptist Church Cemetery at 2pm. In lieu of flowers, contributions may be made to the War Memorial Cultural Arts and Community Center in Powhatan.
To order memorial trees or send flowers to the family in memory of Frederick Warren Boatwright, please visit our flower store.