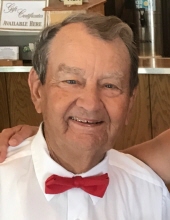 Herbert Hindle Goodman, of Sunnyside, passed away peacefully at his home on August 1, 2020, departing this life at age 87. He was preceded in death by his first wife, Nancy Hughes Goodman, and his son David Hindle Goodman. He is survived by his wife, Patsy Griffin Goodman; his daughter, Susan Goodman Carden (David); and his son, John Edward Goodman (Sadie); three grandchildren, Elizabeth, Porter and Calvin; loving stepdaughters Gayle Noble (Robert), Kim Pierce, and Gwenn McNeely; and numerous nieces, nephews, and great-nieces and –nephews. He is mourned by his church family and his community as well.
Born March 25, 1933 to Herbert and Edna Goodman, Herb lived his whole life at the Goodman farm and home place, “Oatland,” the fifth generation of Goodmans to reside there. Herb was a product of the Cumberland County schools, graduating from Cumberland High School in 1951. (Herb’s dedication to the public schools of Cumberland would later be reflected in twelve years’ service on the Cumberland County School Board, a position his mother had held – the first woman to do so – for fifteen years.) Herb received the B.S. degree from Longwood College in 1955, matriculating as a day student while farming at Oatland. After teaching science and biology at Farmville High School for three years, Herb transitioned to what would become a nearly forty-year-career with Virginia Farm Bureau.
Herb worked as a successful agent and agency manager, made lifetime friendships with colleagues and clients, put two children through college, and retired from the company in 1995. Herb was a vital part of the Cumberland community, in a host of organizations and in ways large and small. He was a member of Payne Memorial United Methodist Church for more than fifty years, serving in practically every non-clergy capacity imaginable. It was hardly possible to attend a service or event at Payne and not be greeted by, served by, spoken to, taught by, or sung to by Herb. Only a few days before his passing, Herb in an unsteady hand had signed and addressed cards for Payne members with August birthdays and anniversaries.
His Christian discipleship went far beyond his home church. Herb was a founding member of the Southside Emmaus community, where he served as a table leader or lay director on dozens of “walks to Emmaus.” He served for decades with Gideon’s International, distributing Bibles in prisons, schools, the Farmville 5-County Fair, and elsewhere. Herb was an active member of the Kairos Prison Ministry of Virginia, frequently participating in weekend spiritual retreats held within the Buckingham Correctional Center. He leaves behind well-worn prayer lists, made carefully on church bulletins and scraps of paper, filling the Bible and devotionals that he read every morning of his adult life. Herb was “a doer of the Word, not a hearer only.”
Herb was dedicated to improving the community, over so many years and in so many ways that it is hard to recall them all. His school board service was marked by his engagement and visibility; he would frequently turn up in CES classrooms as a volunteer reader. Herb’s tenure also saw the creation of the Cumberland County Public Schools Foundation, which still oversees, among other things, the awarding of scholarships to deserving Cumberland students. Herb served with others in organizing and managing Little League baseball in Cumberland, and could be seen at many a game chalking the baselines, selling hot dogs in the concession stand, or putting on an umpire’s mask and chest protector. Among other organizations, Herb was active for decades with the Cumberland Ruritan Club, the Grove Cemetery Association, and the Cumberland County Historical Society.
Herb was a skillful farmer, helping his mother manage the farm at Oatland after his father’s untimely death in 1950. He was for many years an enthusiastic quail hunter, and always kept at least one bird dog. Herb was an avid square dancer with the Fluvanna Flutterwheels, and always knew what to do when the caller said, “yellow rock!” Upon his retirement, he became a keen golfer, and enjoyed the game not only with his buddies at the Longwood golf course, but in places as far afield as the Old Course in St. Andrews, Scotland. Herb had a fine singing voice, and for years sang at weddings and funerals throughout Cumberland and beyond. He loved a good joke, and was apt to tell you one at any moment. His laugh was vigorous, and infectious.
“I am willing to trust God – no matter what.” Herb kept this handwritten note posted by his chair throughout his final illness, and he pondered it daily, even hourly. Not just his motto at the end, those nine words described how he lived his life.
Herb was a kind, caring, and devoted man. He loved his family, his church, his community, and his Lord. The sorrow his family feels at the passing of this exemplary man is exceeded only by the joy Herb has now experienced in meeting his Savior, face to face.
The family will hold a private graveside service for Herb on August 5, 2020. Memorial contributions may be made to Payne Memorial United Methodist Church, P.O. Box 323, Cumberland, VA 23040; Gideon’s, P.O. Box. 304, Dillwyn, VA 23930; or the CCPSF, Inc. (David Goodman Memorial Scholarship), P.O. Box 313, Cumberland, VA 23040.
To order memorial trees or send flowers to the family in memory of Herbert Hindle Goodman, please visit our flower store.