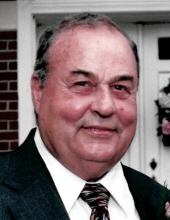 Pleasants, Hugh Berkley, Jr., "Hugh Berk", 88 of Cartersville, passed away February 17, 2020, after a period of declining health. Hugh Berk's wife was Sallie Pleasants, the love of his life. They had five children, Berk Pleasants III (Sharon), David Pleasants, Darlene Pelot (Bill), Hunter Pleasants (Pam) and Kathy Walkin (Lawrence). Hugh Berk had five siblings, 16 grandchildren and 19 great-grandchildren. Hugh Berk worked in his family's store Blanton & Pleasants, Inc. for 50 years. He will be fondly remembered for his love of Cartersville and family, rock and gem collecting, and especially the ease with which he made friends. Our family will hold fond memories of Dad opening his home and entertaining all those who entered. As the saying goes, "He never knew a stranger". A graveside service will be held at the Cartersville Cemetery at 11am Friday, February 21. A reception will follow at the Cartersville Baptist Church. In lieu of flowers please make donations Passion Community Church, Powhatan location.
To order memorial trees or send flowers to the family in memory of Hugh Berkley Pleasants, Jr. , please visit our flower store.