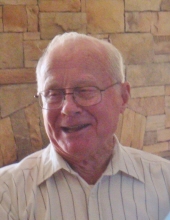 James Corbett Guss, 94 of Powhatan, passed away Thursday, December 24, 2020. He was preceded in death by his wife, Charlene Adkins Guss; daughter, Theresa Lynn Guss; grandaughter, Kimberly Dawn Guss; sisters, Annie Iris Guss, Hazel Bradley and Blanche Cook; brother, George O. Guss and son in law David Groome. He is survived by four children, James "Mike" M. Guss of Midlothian, Donald "Don" R. Guss (Diane) of Midlothian, Jonathan "Wayne" W. Guss (Ronnie) of Mechanicsville, Cheryl Ann Groome (David) of Powhatan; 5 grandchildren; 14 great grandchildren. He served his country in the Navy Amphibious Force during World War II in the Pacific Theater. After the war he was a truck mechanic for 45 years, working in Texas and the Richmond area. The last 35 years as a Shop Foreman for Stamie E Lyttle Co.. In 1976 he and Charlene bought the old Guss farm that had been in the Family since 1879 and spent many years working to restore it. They both enjoyed country life, good neighbors and friends. A Graveside Service will be held Wednesday, December 30,2020 in the Genito Presbyterian Church Cemetery at 2:00 PM. In lieu of flowers, contributions may be made to Powhatan Rescue Squad. Online condolences may be made at bennettbardenfh.com
To order memorial trees or send flowers to the family in memory of James Corbett Guss, Jr., please visit our flower store.