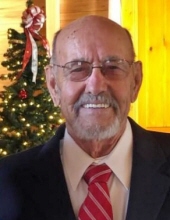 James "Jim" Byerly, 83 of Powhatan, went home March 22, 2020. He is survived by his wife, Saundra Byerly; two sons, Mike Byerly (Dani) of Powhatan, Dwayne Byerly (Michelle) of Old Hickory, Tn.; brother, Kenneth Byerly of North Carolina; two grandchildren, Joshua Byerly, Chad Byerly (Sami) both of Powhatan. He was preceded in death by his parents, Everette & Reba Byerly; brother, Harrison Byerly and sister, Clara DeBoard. Jim was an Army Korean War Veteran. He retired as a supervisor from McLean Trucking Co., Powhatan County Transportation Supervisor. He ended his career as the Activity Bus Driver for Powhatan County, known as Mr. "B". A memorial service will be announced at a later date with interment private. In lieu of flowers contributions may be made to Powhatan Mennonite Church, P.O. Box 220, Powhatan, VA 23139.
The family has a temporary memorial on Academy Rd in Powhatan. Allowing social distancing in the troubled times. There is an available place to leave notes for Jim or the family. Be careful stopping it’s a busy road, or just toot the horn as you pass by.
To order memorial trees or send flowers to the family in memory of James "Jim" Byerly, please visit our flower store.