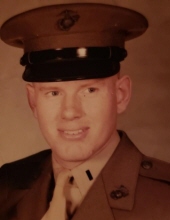 On Tuesday, June 30, 2020, Jeffrey Lee Spoon (74), succumbed to cancer surrounded by his family in the home he shared with his wife, Juliana Tepaske-Garrett. Jeff, eldest to James Vernon Spoon and Helen Magdalene Spoon (Cordes), was born on November 1, 1945, in Chicago, Illinois. He attended Michigan State University where he studied Police Administration and committed to the United States Marine Corp, joining USMC Platoon Leaders Class his sophomore year. Upon graduation in 1967, he entered the United States Marine Corp as a 2nd Lieutenant. During his training as a Naval Aviator in Pensacola, Florida, Jeff married Claudia Helen McDaniels (Leslie, Michigan). He notably completed two tours in Vietnam as an F4 pilot before he had his first son with Claudia, Benjamin Scott Spoon, in February of 1971. Jeff raised Ben as a single father alongside his family after the unexpected death of his late wife in 1971 while he continued his career with the USMC. In 1975, Jeff married Mary Susan Spoon (Johns) (Houston, Texas), whom he met while flying through Midway Island. Shortly after in July of 1977, Jeff and Susan had a son, Lee Aidan Spoon. In 1979, Jeff left the USMC and moved his family to Aurora, Colorado, where he flew commercially for several years. In 1981, Jeff left flying and began a new career with the Arapahoe County Sheriff’s Department, where he quickly ascended to the rank of Captain of Detention Administration. During this time, he also earned his MBA from the University of Colorado at Denver. That experience prepared him for his next career as Vice President of Project Development with Wackenhut Corrections, for which he traveled extensively to Australia and South Africa. After the end of his second marriage in 1995, Jeff settled in Stuart, Florida for a time. As an aesthete of deep-sea fishing forever imbued with the soul of an entrepreneur, Jeff owned Treasure Coast Props for several years until moving to Virginia Beach, Virginia in 2009. Not long after moving to Virginia, Jeff met and made a life with Juliana Tepaske-Garrett (Powhatan, Virginia). He also started his last career as an over the road truck driver with Abilene Trucking. Juli traveled with Jeff often, where they shared many adventures and created an abundance of wonderful memories. Jeff and Juli were married in a small family ceremony at their home on June 13, 2020. Jeff took great pride in hosting countless family events, holidays, and get-togethers, for which his family hopes to carry on the tradition. He could always be counted on to serve up a mean rum cocktail and celebrated life with a retort that everyone grew to love. He loved a good cioppino and in fact, could likely point you to the best seafood in any town, anywhere, even in the middle of the desert.Jeff was greatly loved and respected by his family and close friends, and he fiercely loved his family and friends right back. As such, Jeff is survived by his loving wife Juli, his sons, Ben and Lee Spoon, his sister Melissa Ann Mitchell (Spoon), his daughter in law Marta Spoon (Ojo), his grandchildren Justin Ojo and Dana Spoon, his nieces and nephews Kate Spoon, Megan Casper, Kelsey Mitchell, Rebecca Mitchell, Aubrey Mitchell, Phillip (Boede) Mitchell, and Jesse Herbert, and countless other extended family members and friends, who will miss him dearly. He was predeceased by his parents, his brother Steven Lee Spoon, and his sister Kris Lynn Spoon. His family will receive friends to celebrate his life at May Memorial Baptist Church, 3922 Old Buckingham Rd, Powhatan, VA 23139, on Sunday, July 26, 2020, at 2 pm.
In lieu of flowers, memorial donations may be made to Lonesome Dove Equestrian Center, which helps Veterans Ride Again, 6137 Old Buckingham Road, Powhatan, VA 23139, www.LDEquestrian.com
To order memorial trees or send flowers to the family in memory of Jeffrey Lee Spoon, please visit our flower store.