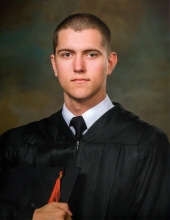 John “Johnny” Michael Jeffers, 19, of Powhatan, went home to be with Jesus on February 13th, 2021. He was preceded in death by his paternal grandfathers Vernon Jeffers and Lowell Good. He is survived by his parents, John and Jaqueline “Jackie” Jeffers; his sisters Brittany Campbell, Jessie Troyer (David), and Sherrie Jeffers; his maternal grandparents Gordon and Nellie Moss; his paternal grandmother Idella Good; uncle Carl Jeffers (Vanessa), aunt Carolyn Brooks, and many cousins; two nephews and one niece. John had many gaming friends all over the world. John was an avid gamer, marksman, woodsman, and a walking encyclopedia. He was a beloved son, brother and friend to all who knew him and will be greatly missed. Visitation hours for friends and family will be Tuesday from 2:00pm to 8:00pm at the Bennett & Barden Funeral Home. The funeral service will be held on Wednesday at 11:00am at the Bennett & Barden Funeral Home with burial at Powhatan Community Cemetery. The service will be streamed live from the Facebook site and available to watch later on the Bennett & Barden site. The family wants to thank everyone that contributed to John’s excellent care following his car accident.
To order memorial trees or send flowers to the family in memory of John "Johnny" Michael Jeffers, please visit our flower store.