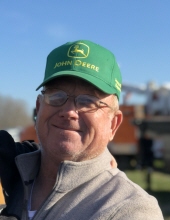 Thompson, Larry Edward "Grandaddy", 71, of Farmville went to his heavenly home on Friday, April 1, 2022. He is survived by his loving wife of 39 years Debbie; son, Matthew and his wife Ria of Pflugerville Texas; daughter, Whitney Lipscomb and her husband Robert of Farmville; five grandchildren, Tyler, Ethan, Robbie, Nora, and Jack; mother-in-law, Betty Sauer; his dog, Maddie; and his four precious cows: Molly, Maggie, Lincoln, and Patty Poo. He was born on March 30, 1951 in Powhatan, Virginia. He served his country in the US Air Force during Vietnam before joining the Virginia State Police in 1980 as a trooper. He married the love of his life, Debbie, on February 25, 1983. He eventually transferred to DMV, where he served as a special agent and was instrumental in starting their motor carrier division, working there until he retired in 2014. In retirement he could be found driving his tractors, tending to his hay fields, enjoying his cows and helping his neighbors. A special thank you to Johnston Willis neuroscience ICU nurses, Mike, Doug, Tiffany, Ashley, Alaina and Dr. Charles Miller also nurses Kathy Burns, Holly Lockwood, Debbie Upson and Renee Cosby, Dr. Manmohan Khokhar for their care, love and support. The family will receive friends in the Bennett & Barden Funeral Home, Powhatan, Thursday, April 7, 2022 from 4-7:00 pm. A funeral service will be held at, The Barn at Timber Creek, 525 Holman Mill Road, Farmville, VA 23901 on Friday, April 8, 2022 at 11 am, interment, Trinity Memorial Gardens 22490 Prince Edward Hwy, Rice, VA with a reception to follow at The Barn at Timber Creek. In lieu of flowers, the family requests that all donations be made to Bethlehem Baptist Church, P.O. Box 66, Dillwyn, VA 23936.

To order memorial trees or send flowers to the family in memory of Larry Edward Thompson, please visit our flower store.

The Barn at Timber Creek