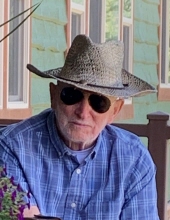 Larry Gene Sweeney, 85, of Powhatan County, passed away surrounded by his family on September 16, 2022. He was preceded in death by his parents, Palmer and Gladys Sweeney. He is survived by his wife, Barbara Sweeney; sons Larry GC. Sweeney(Katherine) and Eric Douglas Sweeney(Lori), Daughter Laura Michaels(David), Brothers, Kenneth Sweeney(Hope), Dennis Sweeney(Volina), Roger Sweeney(Carolyn), Palmer Sweeney JR.(Norine), Michael Sweeney(Jennette), and Jerry Sweeney(Sharon); Grandchildren, include Andrew Younger, Tyler Sweeney, Cheyenne Sweeney, Krissa Sweeney and Great Grandson Jake Michael Younger. Larry was an avid outdoorsman. He enjoyed fishing the waters of both Smith Mountain Lake and Chickahominy Lakes. He also enjoyed his days hunting a field in his native Dickinson county as well as Powhatan County. Larry was a beloved son, brother, father, and grandfather. While we are saddened by his passing, we rejoice in knowing he has gone home to join the Lord. A memorial service will be held Thursday at 1:00 PM in the Bennett and Barden Funeral Home Chapel. Online condolences may be made at Bennettbardenfh.com

To order memorial trees or send flowers to the family in memory of Larry Gene Sweeney, please visit our flower store.