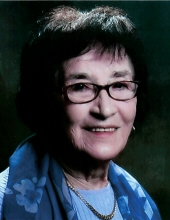 Luella Catherine Raucci Banton (Rocky),95 of Powhatan, died Friday, May 3, 2019, after a brief illness. Luella was born in New Haven, CT on February 7, 1924. She was the daughter of Leone Raucci and Concetta Iovanne Raucci, immigrants from Caserta and Avellino, Italy. Luella took great pride in her Italian heritage. Luella was a proud veteran of World War II, serving as a medic in the Women’s Army Corps in Iowa and Washington, D.C. While in the army, she acquired the name Rocky, when the wounded soldiers she assisted mispronounced her last name. In 1946, she met fellow soldier Otis Banton and was married. They were married for 51 years, until his death in 1997. Luella was a retired employee of the State Health Department. She loved her family, her country, the sun, gardening, and playing cards. Luella was a devout Roman Catholic, a founding member of both St. Edward’s Catholic Church and St. John Neumann’s Catholic Church. Luella is survived by her 3 daughters Paula Midkiff, Sylvia Hogan, and Lisa Banton; her 2 sons-in-law James Midkiff and David Baber; her 4 grandchildren Kelley Midkiff, Talor Hogan, Mariah Snellings, and Catherine Snellings; and her 4 great grandchildren Mia Larsen, Benjamin Larsen, Mason Hogan, and Eleanor Bondley. She was preceded in death by her brother Geremia (Jerry) and sisters Anna Marie (Mary) Pappalardo and Madeline (Mickey) French. She is survived by her sister, Leona Guido, her brother-in-law, Thomas French, and special family members Brian Toibin, Ralf Nass, Trevor Bondley, and Richard Dewitt. The family will receive friends Monday from 6 to 8pm in the Bennett and Barden Funeral Home 3215 anderson hwy (RT 60)Powhatan. Graveside services will be held Tuesday 1 pm at Greenwood Memorial Gardens, Goochland. A reception will follow at Spring Arbor of Salisbury – Assisted Living Facility.In lieu of flowers, the family requests that donations be made to St. Jude’s Hospital (P0 Box 50 Memphis, TN 38101). We would like to thank the nurses and staff at St. Mary’s Hospital, Bon Secours Community Hospice House, and Spring Arbor of Salisbury for taking such good care of our mother. She was a true force of nature and the best mom ever!
To order memorial trees or send flowers to the family in memory of Luella Catherine Raucci (Rocky) Banton, please visit our flower store.