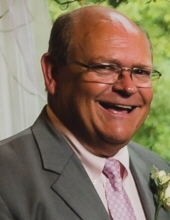 Matthew "Matt" Jennings Bennett (60), of Powhatan, passed away November 28, 2020. As a young man, he felt called to the funeral industry. He received his Funeral Director and Embalmers License in 1982. He purchased the Rose Funeral Home in November of 1985. In 1992 he relocated to the current location and changed the name to Bennett & Barden Funeral Home. Located in Powhatan, he started his family and became a pillar in the community that he loved and served. Matt was involved in The Lions Club, church softball, youth softball coaching for Beth and Sarah, and was Charlie's crew chief for go-cart racing. He was a die-hard Redskins fan who always loved to laugh. He was a beloved husband, Dad, and Pop-Pop. He will be greatly missed. He is preceded in death by his father, The Rev. Rex J. Bennett. He is survived by his loving wife, Debra O. Bennett; daughters, Beth Bennett Weaver (Stephen) and Sarah Bennett Clift (Jeremiah); son, Charles "Charlie" Matthew Bennett (Renee); step-daughter, Stephanie Wammock; mother, Joyce Brock Bennett; Pop-Pop's grandbabies: Brock, Celeste, Maeve, Otto and Gabriel; siblings, Cindy Bennett Winters, Barry Bennett (Susan), Jane Bennett-Bailey (Jeanne). A public viewing will be held Thursday (today), from 12-8:00 PM, with a visitation from 6-8:00 PM at the Bennett & Barden Funeral Home. Services will be held at the funeral home on Friday at 11:00 am. Interment Powhatan Community Cemetery.
To order memorial trees or send flowers to the family in memory of Matthew Jennings Bennett, please visit our flower store.