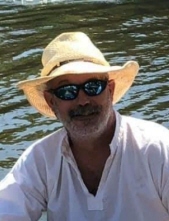 Michael James Harris (“Mike”), 51, passed away peacefully in his sleep on January 28, 2020. He was predeceased by his mother Margaret Wiley Harris and two mixed breed dogs Petey and Lodi (no AKC dogs for Mike.) He was also predeceased by his grandparents Dr. and Mrs. James Boyce Wiley of Decatur, AL, and Mr. and Mrs. Jack T. Harris of Plantation, FL. He is mourned by his father M. Stevens Harris of Powhatan; his brothers, Mark (Kristin) of Davidson, NC, Patrick (Sonja) of Midlothian; aunt, Suella Steel (John) of La Jolla, CA; uncle, Dr. James Boyce Wiley, Jr. (Anne) of Decatur, AL; aunt, Patricia Wiley of Birmingham, AL; nephews, Matthew, Evan and Jensen, niece Shelby and a host of first and second cousins who loved him dearly. Mike was born in Richmond on February 22, 1968, two minutes before his twin brother Pat. He grew up in Bon Air, graduating from Midlothian High School then Ferrum College in 1991 with a degree in Marketing and a favorite course of fly fishing. Mike lived in a reclaimed log cabin in Powhatan and loved all things outdoors where you could shoot a gun, launch a boat, or paddle a canoe. He hunted with the Rocky Ridge Hunt Club in Bath County where he was a board member. He also hunted in Amelia, Goochland and Powhatan counties, and enjoyed punching holes in paper targets whenever he had the time. Mike was an accomplished cabinet maker and trim carpenter, not earning a living in his chosen college degree, instead choosing sawdust over a desk top computer. His trim work and cabinets can be found in some of the finest homes and businesses in the area. Mike was raised in the Southern tradition, always respectful to everyone, with a trusting nature, gentle smile, and his handshake was his bond. To quote one of his dear friends, if you were lucky enough to meet Mike you were his friend; if you got to know him you were family. As our hearts are saddened and we try to understand this sudden and terrible loss, Mike has gone to a better place to be with Mom and he has much Joy in his heart. A visitation will be held on Monday, February 3, 2020 from 6 to 8 p.m. at Bennett and Barden Funeral Home, 3215 Anderson Highway, Powhatan. A Service in Celebration of the Life of Mike will be held on Tuesday, February 4 at 1 p.m. at St Luke’s Episcopal Church, 2245 Huguenot Trail, Powhatan, immediately followed by a reception. In lieu of flowers, memorial contributions may be made to the Virginia Canals and Navigations Society, 3806 South Amherst Highway, Madison Heights, VA 24572 or The War Memorial Cultural Arts and Community Center (WMCACC), P.O. Box 579, Powhatan, VA 23139. Online condolences may be made at bennettbardenfh.com
To order memorial trees or send flowers to the family in memory of Michael James Harris, please visit our flower store.