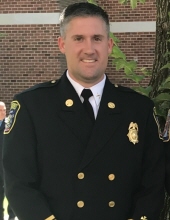 Michael Paul Lecik, Jr., 41 passed away March 16 at his home in Powhatan after a 2 year battle with Multiple Myeloma. Mike was born in Steubenville, Ohio. He served As a firefighter in the U.S. Air Force from 1999-2008. He Then continued his firefighting career working for various agencies including Navy Region Mid-Atlantic, the DLA, and most recently Ft. Lee as the Chief Fire Inspector. Mike proudly served with the Huguenot Volunteer Fire Department in Powhatan as an Assistant Chief. Mike is survived by his wife, Tiffany and their three daughters; Amery, Aubry and Adalyn along with his parents Michael Lecik, Sr. and
Carolyn Lecik, his sister Jessica Parry (Cory), in-laws David and Diane Carlton, Taylor Carlton (Cassie) and Laura Horvath (Jason) as well as many nieces, nephews and extended family. A service will be held Saturday, March 27th at the Passion Community Church, Powhatan Location at 1:00 PM. Followed by a reception at the Huguenot Volunteer Fire Department. In Lieu of flowers please make donations to the Powhatan Huguenot Volunteer Fire Department. Condolences can be made at bennettbardenfh.com.
To order memorial trees or send flowers to the family in memory of Michael Paul Lecik, Jr., please visit our flower store.