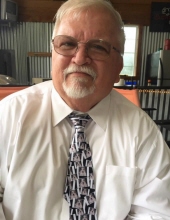 Nelson Paige Bishop, 71, was met in heaven on Oct. 22 by his parents, Nelson S. Bishop and Doris Taylor Bishop. He is survived by his son Russell Martin Bishop and daughter-in-law Carolyn, of Powhatan, and his sister Dr. Nancy Bishop Newton and brother-in-law David, of Huntsville Alabama. He will be missed by his wife of 50 years, Virginia Price Bishop. He was a graduate of Fieldale-Collinsville High School, Collinsville Va., and VPI Extension College of Danville Community College. He was a Life Member of the Martinsville - Henry County Vol. Rescue Squad and upon arrival in Powhatan County, his first priority was to join the Huguenot Vol. Fire Department and later the Rescue Squad.
He was first employed by the C&P Telephone Company as a power group engineer from 1970 until 1978. He was then employed by Henrico County Fire Department where he rose to the rank of Captain – which was his life’s goal. He became the first Lieutenant to serve as Public Information Officer for the fire service. He was a founding member of the hazmat team and was part of the state hazmat association for many years. He was also employed by St Mary’s Hospital as a Safety and Security Officer. While there, he helped start and train the S.M.A.R.T. team (St. Mary’s Action Response Team) of nurses and maintenance employees as first responders should a fire occur in the hospital. After 26 years of service to the fire department, he retired to Middlesex County where he volunteered with the Sheriffs Auxiliary Patrol, later becoming a uniformed officer in the courts where he advanced to Chief Bailiff and retired after 18 years of service to the county. Even in retirement, he would work to help out wherever needed. He was the Safety Officer for the Wings, Wheels and Keels Celebration at the Topping airport. He was instrumental in planning and implementing the new radio system for the Middlesex Sheriff’s Department. He served under Sheriff Guy Abbott and David Bushey.
He sadly leaves behind his feline family Winchester, Hobo, Glock, George, Daley, Bryan, Jackie, PPK and Michael. In lieu of flowers, the family requests donations be made to an animal shelter of your choice as Paige truly loved his cats and granddogs. A graveside service will be held in the Powhatan Community Cemetery at 1 P.M. on Wednesday, October 28th.
To order memorial trees or send flowers to the family in memory of Nelson Paige Bishop, please visit our flower store.