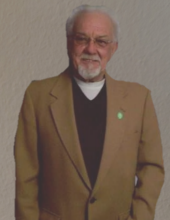 On March 30th 2020 we lost Paul Lynch a man who spent his life making sure others had a better one, simply the funniest and most Generous man I ever knew. He was Predeceased by his parents John P. and Margaret Myra Lynch of Wrentham. He was the youngest of 11 brothers and sisters. The one remaining sister left behind, Winnie from California. Most of all, the Love of his life Laura Nicolson Lynch. He had a full life, he was persuaded to join the Navy at age 16. Where he found out he did not like to take orders, but served with honor. He was once asked if he was always a smart ass and he replied nope sometimes I sleep. He always had a joke for every occasion. He went on to become a Master Mason and was super talented, having his own business and being called upon to restore historical buildings and build incredible out door patios, fireplaces and the list goes on. He continued to work until his body would not allow him to. He spent his life in service to friends and family always going the extra mile or giving when he did not have anything to give and always a smile and a joke. He so enjoyed being with friends and family and he touched so many . We could never travel anywhere without running into someone he touched or some young lady run up and give him a hug. He will be greatly a hug. When someone you love becomes a memory, that memory becomes a treasure - He left us many treasures. He leaves behind many who would call him family. You know who you are please treasure his memory. Left to treasure him are his son John and wife Virginia, Daughter Laura. Grandchildren he cherished so much. Madison , Corbin and Lindsey. Jason and wife Laura. Their three sons Austin, Aiden an Alex. Richard and wife Ciera and their daughter Karter. So many nephews, nieces and those who became his family and just so many people he touched. We will never forget him. Love you OG .
The family will hold a memorial service at a later date.
To order memorial trees or send flowers to the family in memory of Paul Edward lynch, please visit our flower store.