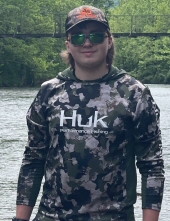 Sean Walker Taylor, 14, of Powhatan, VA, sadly left us on August 4, 2022. He was a beloved son, brother, and friend to many. He is survived by his parents Robert (BJ) and Angela Taylor, his older brother Brandon, his grandparents Robert Taylor and Greg Gudahl, and a host of aunts, uncles, and cousins. Sean's love for his family and friends was as strong as his love for the mountains, hunting, fishing, and the Powhatan football team. He had a strong love for his country and great respect and support for his thin blue line family. He enjoyed being with his Powhatan family and he was known for having the best play list at gatherings. The family wishes to express their gratitude and appreciation for the amazing support from their Powhatan family and community. Sean will be missed by many. The family will receive friends and family on Friday, August 12 from 4 to 6 pm at the American Legion, 4800 Welby Turn, Midlothian, VA. In Sean's honor, donations can be made to The Fisher House.
To order memorial trees or send flowers to the family in memory of Sean Walker Taylor, please visit our flower store.