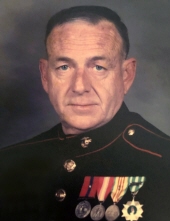 Semper Fidelis - Always Faithful. Spencer Burt Barker, (74) USMC, MGySgt, Ret., of Powhatan, VA, lived his life in faithful service to his country and his family until his passing October 27, 2019. Born July 28, 1945 in Washington, D.C., to Bruce and Pauline Barker, he played football, rode Rodeo and enlisted in the Marine Corps in 1964. After returning from Vietnam, he married his beautiful bride, Judy Kaye Barker, and proudly served his country for 30 years in the Marine Corps, before retiring to move to Virginia to be near his children and grandchildren. A man of few words in his early years, he came to love telling stories, “dad jokes” and terrible puns in his later years, and loved nothing more than making people laugh. He showed his love with a fierce protectiveness, matched only by his generosity of spirit and service to anyone who needed his help. Preceded in death by his parents and brother, Bruce Barker, Spencer is survived by his loving wife, Judy Barker of Powhatan, his daughters, Jamie Lumpkin of Chesterfield and Ashley Barker of Goochland, their husbands Shaun and Dennis, his grandchildren Christian, Addison, Finley, Colby and Chase, and his beloved nieces and nephews. He will forever be missed by so many who love him so much. He was most certainly one of “The Few. The proud.” Our Warrior and now Guardian Angel. Celebration of Life Service planned for Nov. 17, 2019, at 2 p.m. at Bethel Baptist in Chesterfield, VA, and reception to follow at the church. Memorial Contributions may be made to the American Heart Association or the Military Warriors Support Foundation.
https://www.heart.org
https://militarywarriors.org
To order memorial trees or send flowers to the family in memory of Spencer Burt Barker, please visit our flower store.