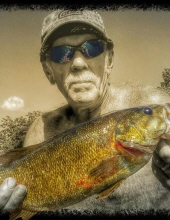 Steve Cosner, of Powhatan, went to be with the Lord June 20, 2019. He is survived by his wife, Martha Cosner; three children, Dawn Welch (Jamie) of Powhatan, Adam Cosner (Erin) of Chesterfield, Jarrett Cosner (Sarah) of Powhatan; his parents, Ed and Shirley Moring of Richmond; one brother, Ted Cosner of Reidville; five grandchildren, Lyndsay, Owen, Colton, Landon and Brennan. The family will receive friends Sunday from 6 to 8 p.m. in the Bennett & Barden Funeral Home, 3215 Anderson Hwy.(Rt.60), Powhatan. Services will be held Monday at 1 p.m. in the Bethel Baptist Church, Midlothian. Interment Powhatan Community Cemetery. Online condolences may be made at bennettbardenfh.com
To order memorial trees or send flowers to the family in memory of Steven Grey Cosner, please visit our flower store.