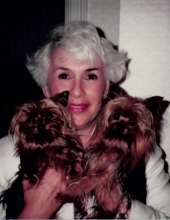 Suzanne B. Fiscus, 80, of Powhatan, passed away November 1, 2019. She is survived by her husband, Jim Fiscus; son, John Bryant; daughter, Donna Bryant; sisters, Maria Harbour and Jane Busst, brother, Roger Busst; grandchildren, Jessie Miller, Daniel Bryant, Dalton Bryant, Madeline Bryant, Jamie Fiscs, Eric Fiscus, Shella Fiscus, Jen Fiscus and Chelsey Fiscus, and two great grandchildren. Suzanne came to the U.S. in 1959 at age 19 and became a U.S. Citizen. She earned an Associates Degree from Monmouth College in New Jersey. She worked at various hospital jobs, including being a youth and alcohol counselor. After moving to Virginia in 1982, Suzanne opened Southport Cafe in Chesterfield. She shared her joy of quilting with friends. For many years she volunteered at BSH. She was known for her beautiful gardens and her feisty Yorkshire terriers. The family will receive friends Sunday, November 17, from 2 to 4:00 pm in the Bennett & Barden Funeral home, Powhatan. A graveside service will be held Monday, November 18, 11:00 am in the Powhatan Community Cemetery. In lieu of flowers please make donations to BSH, Academy Road, Powhatan, 23139.
To order memorial trees or send flowers to the family in memory of Suzanne Busst Fiscus, please visit our flower store.