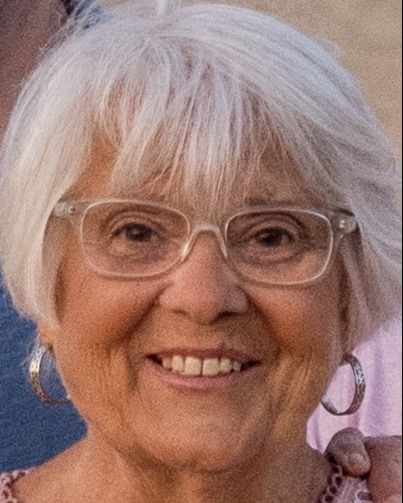 Suzanne K. Dyer Hanrahan, beloved wife, mother and grandmother, passed away on November 17, 2022 in Midlothian, VA, due to complications of kidney disease. First diagnosed in 1987, Sue's fortitude and bravery in her battle against this disease were immeasurable.
Sue was born in Corning, NY on November 16, 1944 to parents Ruth and Lawrence Dyer. She attended local schools and graduated from Corning Free Academy in 1962, then shortly thereafter married the love her life, Bill Hanrahan (whom she'd met at age 16) on August 22, 1964. She worked at Corning Glass Works upon graduation, then as a result of Bill's military draft in 1966, moved to Plattsburgh AFB, where they had the first of many excursions (affectionately named "Sue and Bill's Adventures") to explore the surrounding area, particularly Montreal, Canada. Upon Bill's discharge, they returned to the Corning/Elmira area, where she worked at Corning Community College while Bill completed school and taught in the Elmira school district.
Together, they had four children, the lights of her life: Brian (Lexi) Hanrahan of Midlothian, VA, James (Jennifer) Hanrahan and Eric (Jenn) Hanrahan, both of Cheyenne, WY, and Sarah (Mark) Stirpe of Corning, NY. They were later blessed with 11 grandchildren: Ethan, Jack, Dillon, Bryce, Raegan, Kaylin, Luca, Dominic, Enzo, Michael and Taylor. Sue was historically known for her "momism's" in the family and is famously quoted as saying, "You think you love your own children a lot. .. until you have grandchildren." And she did indeed give her whole heart to not just her grandchildren, but to her whole family.
Life eventually took them to Wyoming, where they lived for 18 years. Sue was happily employed by US West Communications until 1996, where she made many lifelong friends. She selflessly took an early retirement to return to Corning and assist her ailing mother. She enrolled in the travel program at Corning Community College and eventually worked at American Express. Sue had the opportunity to travel quite a bit during her employment, and never missed an opportunity to explore the world, which she enjoyed immensely. Sue retired in 2010, but due to her failing kidneys, the adventurous couple decided for a warmer climate, with the one and only stipulation of hers being that they had to be near grandchildren. This landed them in her final home in Midlothian, VA.
She was predeceased by her parents Ruth and Lawrence Dyer and sister Judith Dyer. In addition to her husband, children and grandchildren, she is survived by her brothers Bob (Mary) Dyer and Fred Dyer, sister Debbie Olsen, and numerous nieces and nephews. Sue will be missed by so many
and eternally loved by her family.
A celebration of her life will held in the spring in Corning, NY.
Sue was an avid supported of St. Jude. In lieu of flowers, please consider a donation to this wonderful organization.

To order memorial trees or send flowers to the family in memory of Suzanne K. Dyer Hanrahan, please visit our flower store.